Posted on January 25, 2015 by briancookeducator

More often than not a teacher’s instructional approach may not work flawlessly and that is OK. However, it is vital to self reflect and look for other instructional strategies which best meet the needs of their students.

They just did not get it … is  a phrase constantly voiced in faculty and content meetings in schools everywhere. If they would have been taught to read better … unfortunately, comes next and sessions are saturated with negativity and lackluster approaches to truly helping children achieve more.

One of the greatest phrases I hear in response to this adult bickering which transitions the conversation back into helping children is as simple as … so what are we going to do about it?

No student has ever come with every skills I desired as a teacher; I have high expectations. However, the reality is the prior teacher sent me the best students they had with whatever baggage that student was carrying with him. My opportunity is to make an impact on that child in their emotional, physical, spiritual and educational growth.

Part of that impact is taking time to step back and answering a personal call to that simple question … so what are we going to do about it?

I think I have great instructional strategies!

But they do not always work for every child and that’s OK. Each child is unique in his and her own way of learning. That’s why sometimes you have to take a risk and teach a concept differently with the understanding it may not work either, but your students deserve that opportunity to master the “unattainable” skills.

This week was dedicated to new instructional activities for skills which were not mastered (80 percent my district), according to data in recent term assessment. My colleague and I scoured the internet to  find what others were doing. We shared conversation about it over lunch. I reached out to my regular language arts blogs.

But we came up empty handed this time which is rare having the internet at your fingertips.

State What You Want Accomplished

In lieu of our defeat, we continued to share what we wanted them to be able to do as I flipped through a textbook and it came to us from seeing an image in a textbook.

Teach point of view through images! The cliche a picture is worth a thousand words ran rampant in our conversation.

Point of View through images

Common Core Standards integrates illustrations and visuals (i.e., print or digital text, video, multimedia) on many topics and the point of view standard was no different in my 8th grade classroom. To bring you up to speed with my classroom lesson, students were given a simple photo of a classroom setting (shown below). This image was chosen because students are experts on classroom settings and the way a student thinks.

Shown is the image used in reteaching point of view.

The classroom discussion shifted towards simplicity of asking what they literally saw (no interpretations yet). Afterwards, students analyzed the character’s body language because often it tells us a lot. For a fun exercise, I offered a chance for students to act out certain body languages (i.e., flirting, anger, bored) without speaking to add some physical movement into the classroom which brought some laughter and built up their confidence.

Following a brief moment of identifying each individual with a character trait, creativity struck in by asking students to think of different scenarios that could be occurring in the situation that the characters find themselves. Students came up with numerous examples which were applicable. For instance, the one boy wanted to ask the other girl to a winter formal, the boy with the phone is texting his mom as his dad goes into surgery, and the girl in the pink is annoyed because her classmates are lacking effort in the classroom.

Unfortunately, with all the modeling, some students still needed a teacher’s model to really grasp what I was building up to. Utilizing the the boy in the tie from above, a model was presented to them shown below. However, I only initially showed them the first paragraph.

In student selected groups of two or a jigsaw (both worked for me), each group selected a card which stated a character from the image and a point of view (first or third). For struggling learners, I offered a mini-graphic organizer to get them started which had these four thoughts:

but highly able students moved straight to the next step of making the character come alive by creating a story around the picture, similar to the model. Prior to beginning, I also offered encouragement in creating a unique perspective for the character coupled with powerful verbs and descriptive language. This task gives students an opportunity to display mastery of point of view and increase their writing stamina with a different writing task. Being a timing fanatic, I only gave students 12-minutes to complete the task, but it could easily vary by teacher and ability level too. 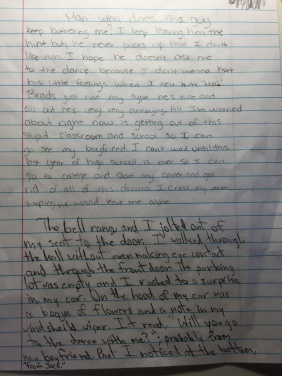 Shown is another group example. I added the last phrase from the back of the page to complete the story in one picture.

Did I mention I hold high expectations? Without letting students know, I collected their original stories and shuffled the stories to redistribute to different authors. Perturbed by the act, I explained to students I wanted them to investigate deeper into point of view by now analyzing the new writing they were given. Students needed to identify the point of view and which character was being referred to by the original author’s description and word choice.

But let’s take it one step farther. The new group must add a paragraph onto the story keeping the same perspective and point of view as the originators. After another timed session (7-minutes), all work went back to the original authors.

Good work or not, students (along with their teacher) must reflect on the challenges of the coursework in order to improve themselves. Now getting a chance to read the original portion and the newly added section, students were asked to reflect upon this question: Was my writing descriptive enough to make my character come alive s others could recognize them?

One group determined their character was OK, but lacked some needed description through vivid word choice. As a result, students are discovering their own fallacies and can self monitor their improvement.

Sometimes there are no single, most critical judge on student than work than that particular student and it stood true for mine as well this week.

Complete a similar activity with a different image which is going to appear in a future story whether it be literary or informational. Also, I would suggest changing the image to a painting or using a clip from a video, but mute the sound. You will be amazed with the results.

2 Responses to Re-teaching point of view

Please, feel free to leave feedback; I enjoy the interaction with my PLN. Cancel reply